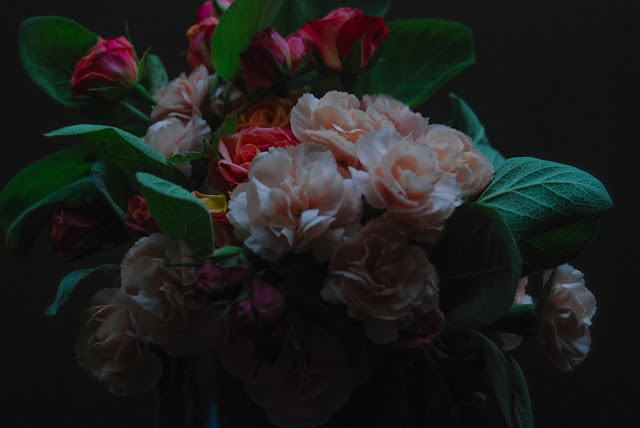 A favorite DC summer pastime is bitching about the heat. I usually don't have a lot of tolerance for such shenanigans, because it's technically hotter back down in my hometown of Durham, NC, but after a week in breezy, 70-degree San Francisco, coming back to the District has inspired me to throw down all the usual cliches: scorcher, sweltering, fry an egg on the pavement, wet-blanket humidity. It is gross, and after more than five minutes outside, so am I.

Having friends over for dinner last night was a great excuse to stay inside and cook all day (with the exception of the walk to and from the grocery store, which I have basically already blocked out entirely).

Our friend Judy brought over a gorgeous arrangement of pink roses and sage leaves cut from her garden and I put together a menu of room temperature and cool foods, culled from my most favorite food blogs.  It was the kind of evening I look forward to in February when I walk to work each day wearing a down sleeping bag with sleeves attached.

This morning, surveying the wreckage of the dining room table, crunching on leftover biscotti with my coffee, and snapping pictures of Judy's now heat-worn roses with my new Tamron lens, I felt pretty friendly towards summer.

I made this up and it was rad. You can mix whatever the hell you want into softened butter to make it fancy, but I had the feathery tops of the fennel laying around from another recipe, so I did that up. I wished I had fancy salt to sprinkle on top!

Cast iron pan. Almonds. Olive oil. Medium heat, 10 min. Then turn off the heat, add whatever spices you want and stir until they stick. Best drinky snack ever.

Beet and Goat Cheese Jewels from 7970 Miles, arugula with olive oil and lemon

Terrines are magic! Layer the beets and chevre (I added some ribbons of basil on top of the cheese) in a tub, smash it down with a bunch of canned soup and leave it in the fridge overnight. It slices into these beautiful stained glass layers and obviously beet and goat cheese are delicious together because duh.

Cold Cucumber Soup with Yogurt and Dill from Food and Wine

This is the raddest because it's really just putting things in a blender. I want to bathe in it. I left out the garlic and amped up the lemon juice. Probably my favorite recipe of the night.

For some reason I've always been phobic about poaching salmon. Whatever. The result is really silky and subtle, and not dry at all even though I overcooked by about 2 minutes. I used white wine instead of gin in the poaching liquid because it's Sunday and I forgot that you can buy hard liquor in DC on Sundays. Next time I'd probably take the herbs off the top before serving and mix them into an aoli to serve on the side. I'd also do salmon filets instead of steaks, because watching my guests eat around the bones stressed me the hell out. Also: the breadcrumbs are nuts.

So light and yummy. Every time I make anything with gelatin in it I freak out a few hours in because it's not gelling! It's not gelling! And then it does. I used sherry vinegar instead of balsamic because I could not find the balsamic and figured I had none. Then an hour later when I was getting something off the top of the fridge it fell on my head.  I would make the substitution again-- the sherry vinegar was brighter and sparkier, which was nice with the buttermilk.  I also used frozen berries and cooked the topping down to a jammy consistency, which set as lovely gel right on top of the cream.

I learned my biscotti technique while working at a pastry assistant at Francesca's in Durham the summer after college. Man was I a lousy employee. Next time I'll dial down the sugar to 3/4 cup and I won't bother using my best olive oil-- the flavor didn't come through quite enough to justify it. These guys cook somewhat unevenly, so I'll also revert back to Mark Bittman's guidelines for baking biscotti: form into logs, bake for 30 min @ 350, slice, bake for 20 min @ 250.

We have been digging La Colombe from Philly. Their decaf tastes legit, especially in a french press.